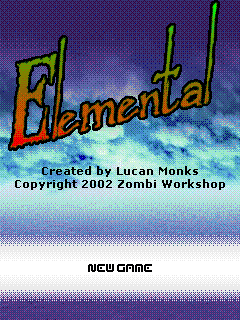 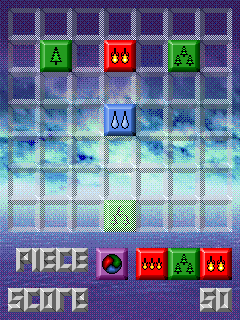 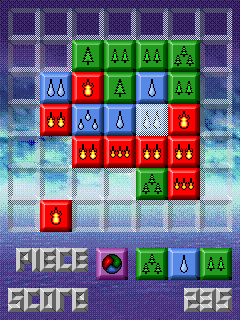 Everything except Music – Lucan Monks

Elemental is an original concept I came up with based around the idea that the rewarding part of “match-3”, “Columns” and other of these type of games was creating a huge chain reaction. I came up with using the paper-scissors-stone mechanism as a catalyst but converting them into elemental forces (Much like the Battle Beasts).

The player has to then place tiles of each element onto the board, until they get an activator tile. This tile could be placed on any element – “activating” it. The element tile would then shoot it’s element out in all four directions and would land up to 3 tiles away (indicated by the number on the tile). If the element lands on a tile that it “beats”, that tile would be activated too. (I.e – If you activate a fire tile, and it’s fire lands on an earth tile, the earth tile would then be activated, if its earth landed on a water tile, that too would be activated…and so on!). The idea was that you had to place your tiles onto the screen one at a time and then clear them before the screen filled up.

The game features several planned modes – the normal mode (don’t fill the screen), the timed mode (score as much as you can in 2 minutes), and the puzzle mode (clear the screen with a limited number of blocks).

But this version of the game was built with the idea that I would be porting it to either mobile phones, or pocket Pc’s – due to a friend of mine working in that sector – and so, was built with a low resolution and minimal colors.

Since then, though, this game has evolved into Elemental Quest and has taken on a totally new look.